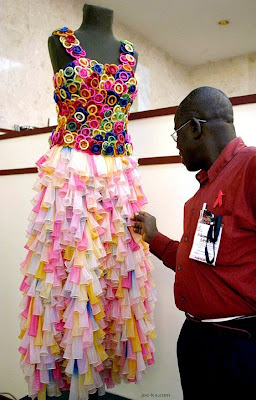 Isn't this dress so cute? I love the bodice, yes it's all made from johnnies! My son is nine and a half, two weeks ago his friend came home after a two week holiday in Greece preaching about the joys of french kissing! Now my guy is cute, he didn't ask me what it was but his friend who is much purer approached his mum (my friend). "Mum? Do you know what french kissing is?", my friend in shock says, "now that's not really something I want to talk about", looking around desperately for something to change the subject. "Well I know what it is mum, it's were you kiss someone with your mouth open and you stick your tongue in the girls mouth.....that sounds disgusting!" My friend is thinking, yes that sounds bloody disgusting..."Yes, it is disgusting, only married grown up people do it!", "But mum, "Blah" did it in Greece!"

This is the way things are going, my son has a mobile phone and he text's girls in his class, he chats with girls on Club Penguin, he is extremely popular with the girls in his glass and often is the only boy at birthday parties (he's either gonna be gay or a stud muffin, and I know which I'd prefer), so I am gonna have to just brace myself, I am open with my kids about sex and we talk about anything that they bring up, but what do you say to stop the kids from having unprotected sex?

Chatting to a woman with two boys, aged 14 and 12, she explained that she was open about sex and talked to the kids about puberty, answering any questions about the ins and outs (ooh missus)! She said there is no point telling boys not to get a girl pregnant, that it needs to be something that affects them. So she tells them if they have sex with a girl they could get viruses that mean they have to go to the doctor, they have to slap their meat and two veg on the table and have all sorts of swabs stuck into them. The kids are horrified, apparently one day one of them asked her if your willy fell off when you "did" sex with a girl, she said it depended on the girl!

So what do I do? I don't want to terrify him, but I need to educate him, I need to answer the questions he asks in a way he can understand but also be realistic, there are some kids at 11 who are sexually active, obviously I hope it's not my kid, but I have to be aware! In my day my mum just said I'd go to hell...that won't cut the mustard today!
Posted by Midget Wrangler at Saturday, September 08, 2007