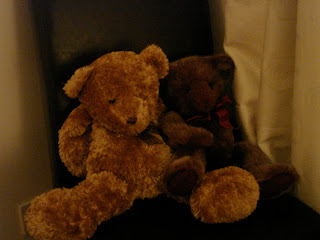 Relax, sit down, it's not as serious as all that. I'm just thinking about the topic of 'suicide'. Specifically, I'm wondering about different peoples attitudes to it.

We were out on Tuesday evening and for some reason suicide came up. At the table of four, three people piped up to say they couldn't understand how anyone would do it. One was particularly vocal, saying that in their experience people who threatened it were either trying to keep this person from breaking up with them, or they were seeking attention, or it was being used as a form of emotional blackmail. It never seemed real to this person.

Throughout the conversation I remained uncharacteristically quiet. I didn't want to put my opinions across for a couple of reasons. One, I didn't want to engage in an argument about something as serious and morbid as suicide. Two, it is something that I have trouble talking about because of...three, I have certainly given it very serious consideration over the years.

Shut up now – stop your oohs and awws. I'm not looking for sympathy. I'm just trying to put across an opinion I was unable to present in person.

It's no secret that I had a rough time in school and not the cheeriest home life. From a very early age I was extremely depressed and this continued for many years. In fact, of my 27 years, I've had more sad years than happy. Thankfully the happy ones have been clumped together over the last six years.

Suicide was always an option for me. Throughout my youth, not a day went by when I didn't give it serious thought. I planned and plotted the ways and means of doing it. I even had two very close calls, which are retrospectively surprisingly funny (admittedly in a darkly funny way). I won't share them now, but maybe I'll jog over to The Lives of Others some day. Suicide, for me, was not a cry for help. It was not a kid seeking attention. It was someone looking for a way to make the pain stop. It was solitary. It was lonely and it was very very real.

Today, anytime I hear of another teen killing themselves, my heart drops. It's the most pointless loss of a life. No one should ever reach the point where the only way out, the only option, the only future they can see for themselves is on the tip of a knife, the edge of a bridge, in the strands of a rope or at the bottom of a bottle of pills.

Yes, people do use talk of suicide to get attention and to emotionally blackmail those around them. This is sick and wrong. But there are so many who suffer in silence. There are so many people who's world causes them physical pain. They ache when the open their eyes in the morning and they plead that the moment they close their eyes at night will be their last moment ever.

I have no solutions. Just be nice to those around you. Be an attentive ear. Be a shoulder to cry on and a wall for them to kick their problems against. Be aware that not everyone is secure. Be aware that some people are just putting forward a façade. And finally, in particular, if you see children having a hard time, being bullied or mistreated, DON'T turn a blind eye. Do something.

Notes:
The Dublin Samaritans offer a kind ear to anyone in need.
Console is a charity that offers help and guidance to those who have lost someone to suicide.
Aware is an organisation that aims not just to help those who suffer from depression, but also to educate society on depression and how best to cope.
The HSE even have a National Office for Suicide Prevention.

Update: Sad news from Maman Poulet as someone in her apartment block took his own life today.
Posted by Darren at Wednesday, August 20, 2008